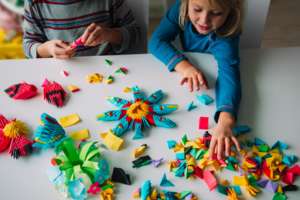 Origami is the art of paper folding, which is often associated with Japanese culture. In modern usage, the word "origami" is used as an inclusive term for all folding practices, regardless of their culture of origin. Origami helps develop hand-eye coordination, fine motor skills and mental concentration. Use of the hands directly stimulates areas of the brain. Memory, non-verbal thinking, attention, 3D comprehension and imagination are further stimulated by the brain's exploration of Origami. While we think of origami as art, it increasingly is being used by companies and researchers in space, medicine, robotics, architecture, public safety and the military to solve vexing design problems, often to fit big things into small spaces. Stress is a physiological problem that affects the body and mind and origami tackles both these by engaging them equally. As the mind starts to get absorbed, you give in to the moment and let yourself be distracted. As the design comes into fruition, you feel a sense of satisfaction and achievement.
Japanese origami began sometime after Buddhist monks carried paper to Japan during the 6th century. The first Japanese origami dates from this period and was used for religious ceremonial purposes only, due to the high price of paper.
The practise or origami has multiple benefits for children. It helps to develop the ability to think and find solutions and improves diligence and accuracy. It also helps in developing the ability to follow instructions. While it sharpens memory and imagination, it’s also a channel of creativity and art.
Origami excites other modalities of learning. It has been shown to improve spatial visualization skills using hands-on learning. Such skills allow children to comprehend, characterize, and construct their own vernacular for the world around them.