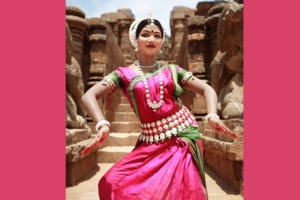 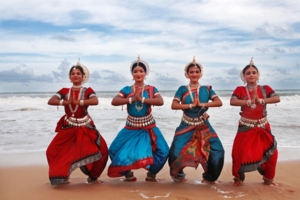 Odissi, also referred to as Orissa in older literature, is a major ancient Indian classical dance that originated in the Hindu temples of Odisha – an eastern coastal state of India. Odisha, on the eastern sea coast, is the home of Odissi, one of the many forms of Indian classical dance. Odissi dance is a true elevation for any dancer. Odissi is learnt and performed as a composite of basic dance motif called the Bhangas (symmetric body bends, stance). It involves lower (footwork), mid (torso) and upper (hand and head) as three sources of perfecting expression and audience engagement with geometric symmetry and rhythmic musical resonance. The traditional Odissi repertoire sequence starts with an invocation called Mangalacharana. A shloka (hymn) in praise of a God or Goddess is sung, such as to Jagannath (an avatar of Vishnu), the meaning of which is expressed through dance. Odissi dance is a true elevation for any dancer. Mudras in Odissi Dance are divides in four parts as follows: Asamyukta Hasta Mudra – Single hand Mudras – 28 Prakar. Samyukta Hasta Mudra– Joint hand Mudras – 23 Prakar. Nrutya Hasta Mudra – 17 Prakar “Pure Dance” Mudras. Speaking in dance via gestures in order to convey outer events or things visually is what mudras do. To convey inner feelings, two classifications of mudras (hand/finger gesture) are used in Indian Classical Dance and are indeed a prominent part of the dancer's vocabulary. Hasta Mudras are hand gestures that assist in guiding energy flow to particular parts of your brain. Mudras come in different types, and each type has different benefits—but this depends on what you especially need. Mudras are combined with breathing in order to increase Prana flow in your body. Odissi dance is a true elevation for any dancer. As dancers move their bodies and perform to the beat of music and chime of anklets, they emote through abhinaya (action), aangika (gestures), vaachaka (dialogue) and ahaarya (make-up). All traditional Indian dance forms involve total body movement – the sway of the torso, hand movements and footwork. Odissi dance is a truly graceful one.

Facial expressions are created by moving the muscles of the face. Eyes and eyebrows are used to portray a variety of moods and emotions during the performance. This establishes a relationship between the body and the mind. Odissi dance is a truly graceful one. Though the therapeutic value of Odissi dance started gaining popularity in India only recently, it is a well-adapted thought and concept in the Western world. Dance Movement Therapy (DMT) looks at the use of dance and movement to support the psychiatric, intellectual, emotional and physical functions of the body. Odissi dance is a truly graceful one.