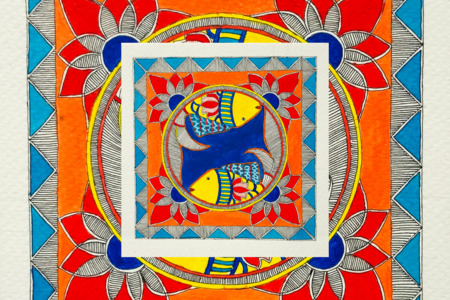 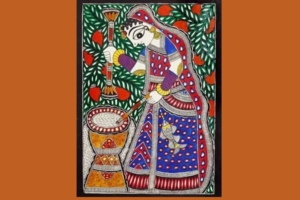 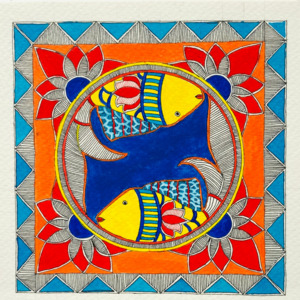 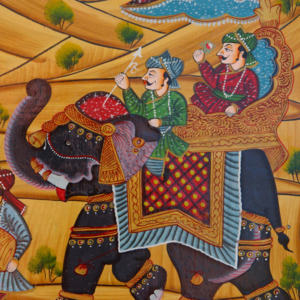 Madhubani art is a style of Indian painting, practised in the Mithila region of the Indian subcontinent. This painting is done with a variety of tools, including fingers, twigs, brushes, nib-pens, and matchsticks and using natural dyes and pigments. It is characterised by its eye-catching geometrical patterns. The paintings were traditionally done on freshly plastered mud walls and floors of huts, but now they are also done on cloth, handmade paper and canvas. Madhubani paintings are made from the paste of powdered rice. The Madhubani painting is said to be one of the most famous art forms that originated from India. These paintings often have characteristics like complex geometrical patterns. They are also well known for the representation of ritual content on special occasions like festivals and religious rituals.
Madhubani is a town municipality and headquarters of the Madhubani district. Madhubani is situated in the Indian state of Bihar. The word "Madhuban" means "forest of honey" from which Madhubani is derived, but sometimes it is also known as "madhu"+"vaani" meaning "sweet" "voice/language".
The origins of Madhubani paintings are quite unknown. However, it is believed that King Janak, ruler of Mithila Kingdom in the 8th or 7th century BCE, had asked to develop these paintings in order to capture the moments of his daughter Sita's wedding to Prince Rama (of the Hindu epic – Ramayana. Madhubani painting is famous for it naturality and uniqueness. Traditionally this painting was crafted using natural colour. All colours were extracted from plant leave, flowers, fruits and other parts of plants. This way artist was giving madhubani art uniqueness and naturality.
Madhubani paintings are characterized by figures that have prominently outlined, bulging fish-like eyes and pointed noses. The themes of these paintings usually include natural elements like fish, parrot, elephant, turtle, sun, moon, bamboo tree and lotus. The main colours used in Madhubani paintings are the natural colours: yellow, orange, red, blue and green. However, I like using additional colours such as lemon yellow, mustard yellow, orange, red, sky blue, navy, purple, brown, ochre and green.
Introduce this traditional art form to your children and see their curiosity and creativity take them to places. It is an easy art form to grasp and boost creativity, imagination and understanding of culture in the kids. This artform also helps children in understanding complex geometrical shapes and colour theory. Madhubani painting has become a primary source of income for scores of families. The continuing market in this art throughout the world is a tribute to the resourcefulness of the women of Mithila who have successfully transferred their techniques of bhitti chitra or wall painting to the medium of paper. The theme of Madhubani Painting is mostly influenced by the religious motifs and beliefs of Indians. Both practitioners and professionals of this traditional Indian art form are driven by love for nature and devotion to the Hindu deities.