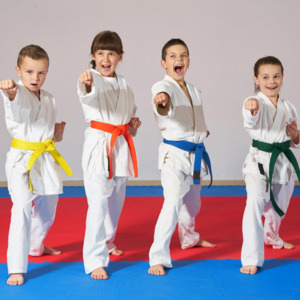 Chinese martial arts, often named under the umbrella terms kung fu, kuoshu or wushu, are several hundred fighting styles that have developed over the centuries in China. These fighting styles are often classified according to common traits, identified as "families" of martial arts. Kung Fu is absolutely effective as a combat art! The goal of sporting arts (Muay Thai, Sanda, Boxing, Kickboxing) are to fight in the ring under rules. Students will be quickly put into sparring, and will quickly develop fighting skills. Of course, these skills can be put to use outside the sport, and outside the dojo.
The term Kung Fu is written in Pinyin as Gong Fu, which is a more accurate and appropriate pronunciation. The term is made up of two characters: the first, Kung (?), can mean skillful work, hard training, or endeavor. Together they mean time spent at skillful work, endeavor or hard training.
Many consider self-defense to be the ultimate goal of Kung Fu or any Martial Art. Yet, the study of Kung Fu is much more than the mere art of fighting. It is truly an art — an art that seeks to develop the body, mind, character, and soul.
Shaolin Kung Fu, also called Shaolin Wushu, is believed to be the oldest institutionalized style of Kung Fu and is one of the most famous martial arts. Shaolin Kung Fu originated and was developed in the Buddhist Shaolin temple in Songshan mountain, Henan province, China.
Learning KungFu as kids has a lot of benefits, such as improving behaviour at home and at school, building self-confidence, instilling discipline, building friendships, dealing with bullying and self-defense. It also helps with concentration and focus in kids.
Enable your kids to be strong and independent with KungFu courses from PiggyRide today.