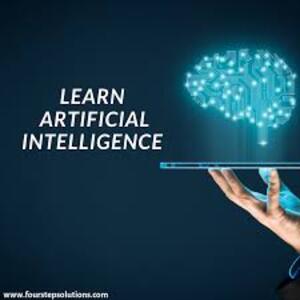 Artificial Intelligence (AI) is the branch of computer sciences that emphasizes the development of intelligence machines, thinking and working like humans. For example, speech recognition, problem-solving, learning and planning.Artificial intelligence is intelligence demonstrated by machines, unlike the natural intelligence displayed by humans and animals, which involves consciousness and emotionality. The distinction between the former and the latter categories is often revealed by the acronym chosen. Artificial intelligence (AI) refers to the simulation of human intelligence in machines that are programmed to think like humans and mimic their actions. The term may also be applied to any machine that exhibits traits associated with a human mind such as learning and problem-solving.
The goals of artificial intelligence include learning, reasoning, and perception. AI is being used across different industries including finance and healthcare. Weak AI tends to be simple and single-task oriented, while strong AI carries on tasks that are more complex and human-like.
Artificial intelligence is widely used to provide personalised recommendations to people, based for example on their previous searches and purchases or other online behaviour. AI is hugely important in commerce: optimising products, planning inventory, logistics etc. AI would have a low error rate compared to humans, if coded properly. They would have incredible precision, accuracy, and speed. They won't be affected by hostile environments, thus able to complete dangerous tasks, explore in space, and endure problems that would injure or kill us. Artificial intelligence (AI) is the basis for mimicking human intelligence processes through the creation and application of algorithms built into a dynamic computing environment. Stated simply, AI is trying to make computers think and act like humans.
Artificial intelligence is being applied successfully in several educational instances, and improves learning and student development, as well as the educators' performance. A child's emotional state affects how well or poorly they are able to focus, engage and stay motivated to learn. Imagining understanding AI so well that you can curate ideas, projects and plans with their help, in order to benefit your product or situation. That’s what is a true sixer!