Anchit vyas - Chess one to one tutoring - PiggyRide 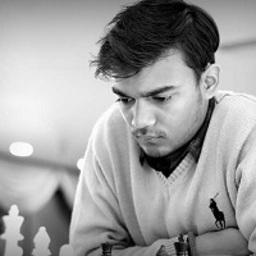 Anchit Vyas has an International rating of 1862 and has been playing chess for more than 12 years. He completed his graduation in BA English(H) from Delhi University, Kirorimal college. Where he won the Silver medal in All India inter-university. He leads DU and his college team for 3 years. He remained sports secretary and sports president of DUSU. He remained state champion for 5 years in different age categories. He worked as a player, chess coach, organizer, maintained a teaching load of 50 students during his internship, and participated in more than 50 National and International level tournaments. Anchit is a very effective tutor you can reach from basic to advanced level with proper training. he has a special course designed for beginners, intermediate and advanced players. For the beginners, he will be covering: Introduction of chessboard and Chess pieces, setting up the starting position, Movement of chess pieces, Value of chess pieces, Attack & Defense, Captures, Special moves, Chess result, Chess Notation, Check and Checkmate, Basic rules of Chess, How to open the game, Checkmate with Queen and Rook, etc. For the intermediate and advanced players, he will assign courses according to players' potential. Anchit has also won the First Position In North Zone Inter-University Championship for consecutive 2 years 2016 and 2017. Placed sixth in around 650 players at Parsvnath International Open Chess Tournament Cat-B, Jan 2016. Placed 10th In International Open Tournament Bhopal in 2016. Represented India In South Asian Amateur Championship in Sep 2016. Won Best State Player prize in Bhopal International Rating Tournament in May 2015. Placed fourth in Sameen Singh All India open Tournament in Dec 2014. Ranked third in Sunita Singh Memorial Open Senior Rating in Sep 2014. Represented State in Senior Chess Championship (National B) for 3 years from 2012-2014. Ranked second in NHPC chess Championship For Below 2200 in May 2013.

Atiksh
6 days ago
I enrolled into Anchit sir's chess class with my cousin to improve our chess skills and play together. He was a great teacher and now we spend hours practicing everyday. Thanks Sir! :)... Read more
0
0

Veeti
1 week ago
Anchit sir is a good teacher who knows how to teach nicely. I was a beginner to chess and he taught me how the sport works and basic things such as openings and strategies. Decent class but kind of difficult.... Read more
0
0

Devansh Mangal
2 weeks ago
Anchit is a very awarded and skilled chess player. He taught my children how to play chess and his skills were amazing. My children were very interested with how he taught and the things he explained and they loved having regular classes with him. I would definetely recommend Anchit as a tutor for anyone who wants to become a very good chess player.... Read more
0
0

Pranay
3 weeks ago
My daughter was a good chess player but had trouble with her Defense and endgame strategies. Anchit was amazing and tailor made the classes to help her fix her weaknesses. I plan on keeping her enrolled in Anchit's classes for longer!... Read more
0
0

Farhaan
3 weeks ago
Anchit sir is an intelligent and confident person. The way he teaches is very easy to understand and helps make classes much more fun. He is able to make the toughest things the easiest to understand.... Read more
0
0

Balveer Singh
1 month ago
My son learned chess from Anchit and this was one of the best decisions for him. Anchit is very learned and professional when it comes to chess and he is also a very good orator. He was able to propel my son's skills to another level and my son is now planning to pursue chess primarily.... Read more
0
0
Read all 6 Reviews
Q&A

Frequently Asked Questions
How does PiggyRide Care work?
How do I find a tutor?
How are the classes held?
How do I book a class?
Current Time 0:00
/
Duration Time 0:00
Progress: NaN%
Playback Rate
1.00x
6 reviews
4.2
per class
$8